Israel – Day One…and a Half 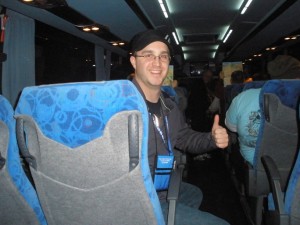 Well, we made it to Israel, what a long journey.  It was one definitely full of interesting occurrences.  Haven’t seen much yet, so obviously, I’m only going to get into the travel details!

First, we met at the Pittsburgh airport at 2:45 p.m. to catch our connection to Filth-a-delphia (aka Philly) at 5:45 p.m.  Nobody had any issues and we breezed through security by 3:30 p.m.  With so much time to spare, we all split our different ways through the AirMall: some for food, others to shop, others straight to the gate.

Well next, we were approaching the typical boarding time, a half hour before departure, about, 5:15 p.m.  Unfortunately, due to maintenance, our flight was delayed coming from Philly to Pittsburgh, so we didn’t have a plane.  Without going into pain-staking detail, we ended up getting on a flight at 8:30 p.m., at our 3rd different gate, and didn’t touch down again until 10 p.m.

Now, do you recall that I wrote this was our connection?  We had to catch a 9:30 flight to Tel Aviv in Philly.  Fortunately for us, that flight got pushed back until 10:40 p.m., but the gate closed at 10:20 p.m.  Therefore, we had 20 minutes to go from what seemed to be the two most distant points of the Philly airport!  Kurt and I booked it to at least let the gate know the rest of our group was on the way.  Thankfully for some carts, we all made it.  However, we had to sit even longer waiting for more passengers in the same situation.  When it was all said and done, we didn’t lift off until exactly midnight!

About 10.5 hours later, we finally touched down in Tel Aviv!  I was able to sleep most of the flight; I had a middle seat too!  I got a slightly-interrupted 7 hours of sleep.  This is actually good in helping to combat jet-lag and the 7 hour time difference.  It was approximately 5:30 p.m. (Tel Aviv time) when we landed.  After landing, we had to go through the world-renowned Israeli security measures (which I applaud).

As soon as I was walking up the ramp and saw a few friends from the group, I was plucked right out by a female security agent.  She immediately asked for my passport, ticket, and later, an itinerary.  However, that’s not the funny part of this first encounter, one of many I’d have in the next 1.5 hours!  The group thought she was talking to everybody in general, and she was somewhat bewildered at their questioning of her for what she wanted of them.  Her response was that she thought they were my family the way they were interacting with me.  So she asked if anybody was my relative, obviously everybody said no.  Well, everybody except Karl; “Yea he is!” Karl responded strongly.  And she looked at me and everybody was looking curious, and I just shook my head “no.”  Turns out, Karl thought she asked if we were all a part of the same group.  Well, she shooed everybody away and began to question me about my purpose, destination, and itinerary.  I was then allowed to keep moving….off the ramp!  I was just barely inside the airport!  The group was waiting for me around the corner and any last stragglers and were all wide-eyed at this unfamiliar form of security.

Next stop, Passport Control, the real interrogation!  After seeing faster lines to have our passports checked and stamped, Kurt, Zach, and I hoped over to a new line that was opening up.  We were going to be second in line.  However, a family hoped over a rail and when I politely and passively said “no” to their cutting, they empathetically said they were family with the folks in front of me.  Like that gave them cutting rights, but I looked at Kurt, I wasn’t going to start something in the Israeli Passport Control line!  We let them cut.  Well, they turned out to be cutters alright.  When the line they originally came from opened, 2 cut right back over, cutting off a young girl.  The girl stood in disbelief…this is Israel, you don’t do that!  Well, those people got through and the final members of this family were going to cut again in front of this girl.  The girl wasn’t going to have any of it though.  The Passport Control person saw what was happening and motioned for the family to get back to their line, our line.  She then told the representative questioning travelers in our line that this family was pulling something.  And then about 20-30 minutes later, Kurt, Zach, and I were standing at the front of the line cracking up at this family getting grilled and questioned!  They were finally pushed aside, but weren’t allowed through.  Next up, me.  I couldn’t hear the girl very well, but she asked some of the same questions I initially was asked on the ramp.  However, this time I was asked where I was staying and if I was with people; “we”, I said we.  That obviously sparked her interest: who are you with, why are you all here, is your guide Israeli, and are you all American, are you going to Jericho and Bethlehem (2 PLA controlled West Bank towns).  She then got on the phone and in Hebrew I could hear her say some familiar towns I’d be traveling to and some other key words I gave her.  She hung up the phone, stamped my passport, and gave me my exit ticket.

Whew, DONE!  Or so I thought!  I walked around the booth (just after I saw the cutting-family get taken away by a new representative for more questioning!) and saw everybody from our group, besides Kurt and Zach who were still in line behind me.  They all waved and directed me to the final exit to present my exit ticket and meet them in baggage.  Well, as soon as the ticket taker saw my ticket, she prompted for my passport again and motioned over another security agent!  All females by the way (this is an actual tool to keep attractive women questioning men, and attractive men questioning women….read that before I left!).  She asked the same questions I was asked twice before:  how do you know everybody in this group, how many, what towns are you staying in?  She was the easiest questioner. As she gave me back my passport, Steve, our minister and tour guide, said “Wow, you’re really getting all the questions!”  He told me they were making sure my “story” was consistent the whole time and that nothing changed.  Oh, and needless to say, Kurt & Zach both walked out in almost no time right behind me.  I guess I don’t mind being questioned, I have nothing to hide, and I learned a lot about Israeli security and how they perceive and deal with a constant threat. 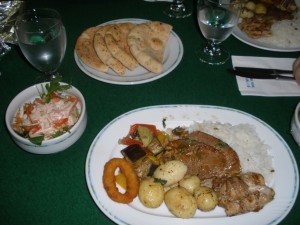 The group was great, they got my luggage and we made our way out of baggage claim, found our tour guide and bus and loaded on up.  I’m on that same bus right now on our way to Tiberias, writing this first blog.  I had to text Jen and let her know all was well though first.  Well, I’m sure we’ll speak soon again my friends!

P.S. I’m updating this blog.  We ate at our hotel on the Sea of Galilee in Tiberias, there’s a picture of my first Israeli meal for you too!

A fun “Party Boat” we saw….heard, outside of our hotel room.