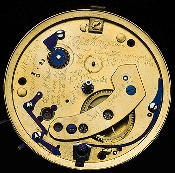 Here’s some fun news for you history buffs out there, a 150 year old secret message has been revealed in President Lincoln personal pocket watch!  Now before you get to keen about a real life National Treasure story happening, there isn’t (as far as we know!) a secret code.  The watch’s creator etched comments that exemplified the period of time:

“Jonathan Dillon April 13 – 1861,” part of the inscription reads, Fort Sumpter (sic) was attacked by the rebels on the above date.” Another part reads, “Thank God we have a government.”

The inscription was an urban myth for those 150 years, passed down by Dillion’s family; the story even made it’s way to family in Europe!  The “myth” finally made it’s way to the curators at the National Museum of American History, where the watch was kept, through the watch-makers great-great-grandson Doug Stiles.  Upon hearing this “secret” news, the museum decided to investigate.  On Tuesday, watchmaker George Thomas, a volunteer, at the museum opened the watch with tiny tools in front of various reporters and fellow museum workers.  Thomas said:

“The moment of truth has come. Is there or is there not an inscription?” Thomas said, teasing the audience, which gasped when he confirmed it was there. He called Stiles up to read his ancestor’s words, drawing smiles and a few sighs of relief.

“Like Pearl Harbor or 9/11, this was the reaction he had (to the Civil War,)” Stiles said of the inscription.

The watch is now currently on display at the museum in an exhibit called “Abraham Lincoln: An Extraordinary Life.”  There is a photo of the inscription so visitors can read without a magnifying glass.

Now let’s just hope curious history buff/treasure hunters don’t try to steal this relic like Nicholas Cage (unless it brings us a wealth of treasure to pay off the debt of these “stimulus” bills!)!