Politics In The Time Between The SuperBowl and Stanley Cup

Today is June 25, I’m chowing down on a sandwich right now during my lunch break (and drinking a great Dr. Pepper w/ Lime fruit shot from Walgreens!).  I’m almost 2 months removed from graduating w/ two Master degree’s.  Needless to say, I and like so many others my age, are full of ambitions!  We all have personal goals we want to meet, ideas on how we can change the world, and our ideas on how to best enjoy life (like going to a Superbowl Parade & Stanley Cup Parade in a 4 month span!).

I haven’t posted too recently about politics or life, or something non-Pirate or Pens related, so it’s definetely about time.  I need to let these thoughts flow. 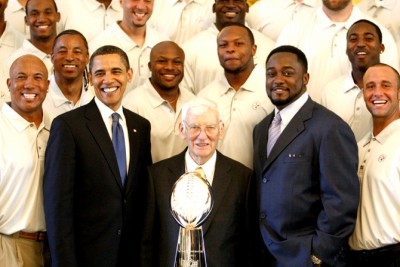 President Obama w/ the SuperBowl XLIII Champions - Pittsburgh Steelers - Members of the Steelers pose with the Vince Lombardi Trophy in the East Room of the White House in Washington, Thursday, May 21, 2009. (AP Photo/Charles Dharapak)

So to start, here are 4 things President Obama has done well during the Pittsburgh Championship Parade span:

The above are self explanatory, especially if you’re from Pittsburgh.  Number 3 does make me frustrated at times because Dan Rooney is a lifelong Republican/Conservative, but altered his allegiances to Obama, the most liberal Senator before becoming President.  Number 4 will make you mad if you have no respect for our American servicemen & women’s lives, but I really don’t care, you’re out of touch with humanity.

Feel free to make a comment about some things you think he’s done well also.  But before you jump the gun, here’s the disasters that are making me furious during Pittsburgh’s Championship Parades:

So there we go, just my quick, built up rant.  Feel free to move to Venezuela or Cuba if you’d prefer the socialistic environment flourishing in one of those two tropic environments!