Why Neither Party Should Party

I read 2 interesting op-eds today from the Wall Street Journal.  And neither could have been more different but they both did the same thing.  The first one was by liberal Arianna Huffington (The Huffington Post) and the second was by conservative Karl Rove (former President Bush advisor). 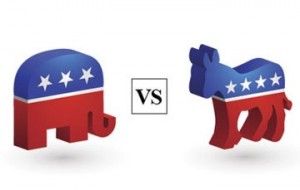 Mr. Rove’s article, titled “Obama Versus Bush on Spending“, talked about current Presidential Advisor, David Axelrod blaming the Bush Presidency on the current state of economic affairs and the reason Obama has had to outspend Bush in just his first year.

I thought that was quite interesting!  One, Bush spent alot of money and raised a huge debt that I’m not happy with.  And two, now Obama is just piling more on top of it.  Regardless of parties here, this shouldn’t be so.

The common response and approval I’ve seen for this disproprinate deficit increase is that because Bush spent so much, Obama had to spend more to recover gracefully.  Really?  Let’s think about this on a level most middle class American’s can relate to, college debt.  If you have $50K of college debt, will you borrow and then spend another $50K so that you can get out of your initial debt?  Obviously not, you live the dream with your folks for a few years, you sacrfice on smaller living digs, and even….gasp!….a 5 year old used car!

So really, is either party correct on the spending spree, I don’t believe so.  Blame is just being shifted, because with only 2 party’s, the power can return sooner rather than later.  With that thought, let’s look at the next article.

This may be very well true.  However, I’m not convinced this is why this Democrat lost in the most Blue state of them all.  The current Presidential Administration ran on a very liberal idealogue when it came to “Wall Street”, desiring to impose hard regulations on this area of the private sector.  The landslide victory for Obama in Massachusett’s last year attests that the voters there agree with that mindset or most other aspects of his left leaning views.

Now, what I can’t understand is why the Massachusett’s voters would run immediately to the right in one year’s time because of the belief Obama hasn’t done enough to restrain the financial industry.  Essentially, maybe even accurately stereotyping, the GOP would be the complete opposite, they’d like to see only common sense regulation’s in place to help prevent a collapse, but allow the free market to still…freely move.

This is why I’m not so sure this was the main reason Massachusetts went Red this week.  Just taking a stab here, but could it be that decliningg job growth and out of control spending are major issues; or could it be that they’ve maybe even seen the high costs of RomneyCare and don’t want ObamaCare also inflicted upon them?

So what’s this shifting really say?  Maybe American’s just want some common sense, get off my back governing.  Shifting may just force whoever currently has the power to do something “stand-up-ish” rather than toying with these outlandish pet projects.