See You At The Pole – Positive & Encouraging

by Josh Fuoco on September 23, 2009
in Christian, Life, Pittsburgh 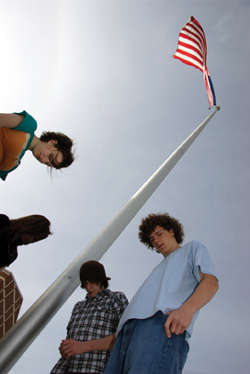 As I was driving to work today, I was listening to the newly popular radio station on 98.3 called KLOVE. KLOVE used to be on 105.5 but recently bought out the better reaching, clearer channel, 98.3 from Froggy country radio (don’t worry, you can still catch Froggy on 104.3!).

If you haven’t tuned in yet to KLOVE, it’s a great mix of contemporary Christian music, including some of the older/legendary/awesome stuff from when I was in high school (I almost lost it one day after hearing Big House by Audio Adrenaline after listening to countless contemporary worship songs!).

Anyways, KLOVE’s constant theme/tag-line in their jingles is “Positive & Encouraging KLOVE”.  It’s great to tune into KLOVE in the mornings and just get a light, refreshing morning show that’s positive to start your day.  Well, today KLOVE earned their listenership with their coverage of today’s nationwide “See You At The Pole” event.  This is were thousands of students gather around their flag poles before the start of classes and pray.  They pray for their country, their families, and their friends, just to name a few topics.  What was great about today’s KLOVE coverage was that Lisa from the morning show covered a girl from Pittsburgh who called in to say that her and her friends had prayed for peace in Pittsburgh this week while the G20 Summit is held here.  How great was this, while many of us Pittsburghers are fretting the traffic and potential violence our city could see, that a national radio station highlights the prayers of a young girl in a Pittsburgh area school praying for the city?!  To top off the moment, Lisa played the song City On Our Knees by Toby Mac.  What a coincidence, that’s our Song of the Moment!

Obviously, with this post, I thought that this was pretty cool to be the first thing I heard this morning, thousands of kids in Pittsburgh were praying for our city this week, what awesome timing!

Next post: The Igloo – Forever Home Of The Penguins