Yes folks, it’s that time of year again … when men of all ages don’t shave (or at least have a valid reason not to), when these same men can be caught crying walking out of the very arena they walked into with shorts on, and more blood will be found on the respective playing surface than during the heyday of the Coliseum.  Folks, it’s Stanley Cup Playoff time!  And for the 3rd straight season, the playoffs are back in the Burgh! 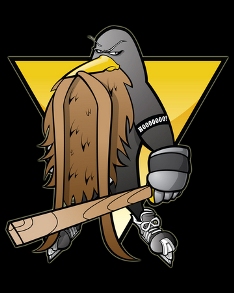 Touting 2 of the past 3 NHL Scoring Champions, a goalie primed for another deep playoff run into June, and a team that’s faced adversity all season long … and has overcome it, your Pittsburgh Penguins are ready to roll!  Now what better way to chase down Lord Stanley’s cup than a first round matchup with the much despised and equally disrespected Broadstreet Bullies of Philadelphia?  Can The Mighty Guins topple over the Flyers as they did last summer in a 5 game route to the Stanley Cup Finals?  Many predictions say “YES”, including many of Sports Illustrated’s insiders.  However, this will be a much different series as the Flyers have their health this time around, as well as a strong special teams.  However, can one truly believe that the depth down the Penguins middle will falter in the first round, after kicking into high gear late this season, while out of contention, to sweep up home ice for the first round?  Heck, the Flyers couldn’t just win Sunday … in regulation, OT, or even muster off a tie, or even lose in a Shootout on Sunday to get home ice.  That’s not what I call a team ready to face the league’s scoring champ and his mighty men.

So leave work early, skip a class, postpone your wedding, rearrange your anniversary dinner, it’s time for some hockey!

Men (heck even some ladies) start growing your beards, let’s hope they’re as long and ugly as ever!

Next post: Bungee Cord – Chair Fall – I know this guy!