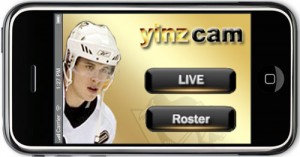 Two of my favorite worlds innovate together once again: sports and technology!

The Pittsburgh Penguins and Carnegie Mellon University have teamed up to provide a first-of-its-kind fan experience in the Mellon Arena.

To the stage – Yinz Cam!  Released for tonight’s Pens vs. Florida Panthers matchup at Mellon Arena, aka The Igloo, simultaneously 200 fans within the arena can watch live video of unique TV angles!  Such cams include the Bench-Cam, Penalty Box-Cam, Overhead Cam and Tight-Action Cam.  All you need is a Wi-Fi enabled phone, access instructions can be found at the Pen’s press release.

This should be an awesome experience, I wonder if they’ll have replay, which you don’t get to experience all that often at a live game.  Currently Yinz Cam is only in Beta testing, so the Pens & CMU would love to hear your feedback via a Facebook Group: YINZCAM or by emailing yinzcam@pittsburghpenguins.com.

Hopefully the Yinz Cam will be available during the Ottawa game Saturday, which I’ll be at.  I’d love to try it out on my iPhone.  Also, how cool of a name is Yinz Cam?!  If you’re reading this and you don’t get it, you must not be from da Burgh, leave a comment and take a guess what it could be, I’d love to hear somebody explain it to you on here also!

If you make it to the game tonight, try out Yinz Cam at test.yinzcam and be sure to leave a comment here and let us know how it turns out!